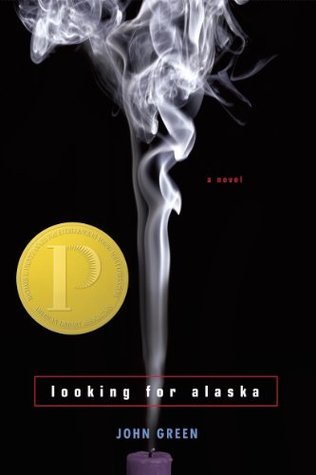 Looking for Alaska by John Green

“Before. Miles “Pudge” Halter is done with his safe life at home. His whole life has been one big non-event, and his obsession with famous last words has only made him crave “the Great Perhaps” even more (Francois Rabelais, poet). He heads off to the sometimes crazy and anything-but-boring world of Culver Creek Boarding School, and his life becomes the opposite of safe. Because down the hall is Alaska Young. The gorgeous, clever, funny, sexy, self-destructive, screwed up, and utterly fascinating Alaska Young. She is an event unto herself. She pulls Pudge into her world, launches him into the Great Perhaps, and steals his heart. Then. . . .
After. Nothing is ever the same.”

John Green will forever fight against the book being banned. This book being banned is quite shocking because I’ve read it and couldn’t exactly come up with a reason on why it was taken out of schools and challenged over and over again. It’s banned for reasons like:

If you want to watch John Green talk about these, he has an entire video about it on the Vlogbrothers! Here’s the link. It’s a great video!

For more in-depth reasons on why it’s banned, here’s a few paragraphs I got from this website. You can see their sources there.

“2008 – New York – Challenged, but retained for the 11th grade Regents English classes in Depew despite concerns about graphic language and sexual content. The school sent parents a letter requesting permission to use the novel and only 3 students were denied permission.

2012 – Tennessee – Challenged as required reading for Knox County High Schools’ Honors and as Advanced Placement outside readings for English II because of “inappropriate language.” School Superintendent Dr. James P. McIntyre, Jr. said that a parent identified this as an issue and the book was removed from the required reading list. He didn’t say whether the book was still in the schools.

Tennessee – Banned as required reading for Sumner County schools by the director of schools because of a sex scene that was “a bit much” and  “inappropriate language.” The book was retained in the libraries.

2014 – New Jersey – Challenged in the Verona High School curriculum because a parent found the sexual nature of the story inappropriate.

2015 – Wisconsin – Challenged, but retained in the Waukesha South High School despite claims the book is “too racy to read.”

Kentucky – Marion County parent complained about book being included on 12th grade english, “calls the novel “filth” and lists his fear that the book would tempt students “to experiment with pornography, sex, drugs, alcohol and profanity.”” The book was removed from circulation until the school committee reached a decision. “Another resident has written to the local paper describing the novel as “mental pornography” and detailing the number of times the “‘f’ word” is used (16) and the the “‘sh’ word” is used (27).”

New Jersey – Challenged, but retained in the Lumberton Township middle school despite a parent questioning its “sexual content.””

Have you read Looking for Alaska? Are you excited for the Hulu show? Let me know your thoughts!

Over on my Tumblr, I asked you guys to share with me the banned books that make you MOST angry. Here’s the link to that post!