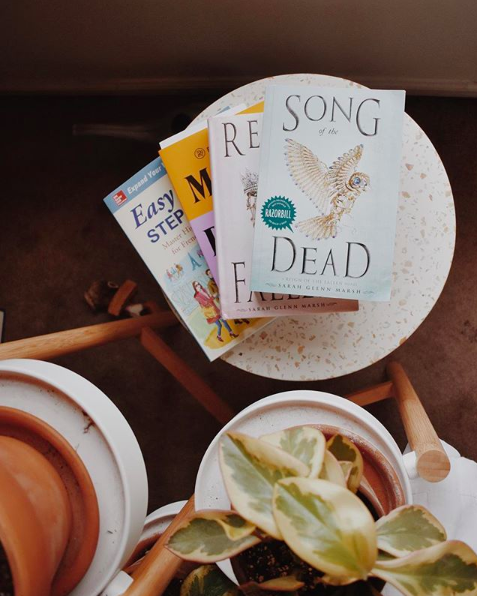 “The Dead must stay buried.

Karthia is nothing like it used to be. The kingdom’s borders are open for the first time in nearly three hundred years, and raising the dead has been outlawed. Odessa is determined to explore the world beyond Karthia’s waters, hoping to heal a heart broken in more ways than she can count. But with Meredy joining the ocean voyage, vanquishing her sorrow will be a difficult task.

Despite the daily reminder of the history they share, Odessa and Meredy are fascinated when their journey takes them to a land where the Dead rule the night and dragons roam the streets. Odessa can’t help being mesmerized by the new magic–and by the girl at her side. But just as she and Meredy are beginning to explore the new world, a terrifying development in Karthia summons them home at once.

Growing political unrest on top of threats from foreign invaders means Odessa and Meredy are thrust back into the lives they tried to leave behind while specters from their past haunt their tenuous relationship. Gathering a force big enough to ward off enemies seems impossible, until one of Queen Valoria’s mages creates a weapon that could make them invincible. As danger continues to mount inside the palace, Odessa fears that without the Dead, even the greatest invention won’t be enough to save their fates.

In this enthralling, heartrending sequel to Reign of the Fallen, Odessa faces the fight of her life as the boundaries between the Dead and the living are challenged in a way more gruesome than ever before.”

I was sent a copy of Song of the Dead by the publisher in exchange for an honest review.

Please note this is a sequel so the review + description contain SPOILERS.

Before we get into the review, I would like to highlight that this book is #OwnVoices and contains a f/f relationship! Yay for diversity in YA 🙂

I went into these books not knowing it was only a duology and now that I’ve finished Song of the Dead, I totally feel like there could be more built onto this world?! I haven’t read such a lovely YA fantasy in quite some time so these books were a breathe of fresh air for me. I loved the romance dearly, the world was new and interesting, and it kind of gave me A Darker Shade of Magic vibes? It might’ve been all the ship traveling, the magic, and a chase for romance. Oh, and Sarah Glenn Marsh doesn’t mind killing her characters off!

I loved seeing Odessa and Meredy’s relationship grow into something much more than it was in book one. I was thrown off at first because I mean, it was a sudden romance with her exes sister. But, I don’t judge. I lived for their relationship from beginning to end. I don’t want to say it was predictable but maybe just a bit. Am I mad? Definitely not. I like how they were able to bond and help each other through Evander’s death. Their grieving was written so well and made me truly feel for them. The chapter where they hear Evander’s voice again even though it’s not him was heartbreaking! I can’t forget to mention that this is a f/f relationship in a Young Adult book done right. It felt so right and I’m so glad I get to see these things in the books I read.

As for the writing, it was fantastic. There’s so many “I need to mark this with my sticky notes” moments. She captures feeling so well and brings her characters to life. Odessa was written as such a strong, caring and ambitious lead. Her actions were always justified and she wasn’t afraid of anything. Odessa is definitely my favorite type of main character.
The only problem I had with this book is that I loved the world, but I wish it were more in-depth. For Fantasy novels, I appreciate a connected, in-depth world that’s descriptive, fascinating, and makes sense. It was sometimes hard to follow whenever they were talking about magic, the world, etc. because it didn’t feel like enough. The world seems so complex but I still don’t understand it completely. This is my only reason I bumped it down .5 stars! It was still an incredibly interesting world to read about but I need more!
Overall, I enjoyed reading this duology but obviously, I wouldn’t mind another book. The world was so fascinating, the romance was captivating and the writing was so well-done. This sequel was SO much better than the first book and definitely worth reading.

Have you read Reign of the Fallen? Let me know!

Are you following me on all social media?

One thought on “Song of the Dead [REVIEW]”